Today, I sat on top of a hill and cried.

I was gazing at the beauty of of the Blackthorne shrub (Y Ddraenen Ddu in Welsh and Draighean in Irish Gaelic) which can be found growing wild in hedgerows and scrub land. I was in session with our Art Therapist.

The shrub has had its name “blackthorn” apparently due to the thorny nature of the shrub, and its very dark bark. Beautiful creamy white flowers appear on short thorny dark stalks before the leaves appear in March and April, either singularly or in pairs. It is such a beautiful shrub and I’m so appalling when it comes to identifying wildlife and shrubs, so I really cherished a chance to sit with ia stalk of it  -for a while. Its fruit (Sloes which is a dark purple fruit) are traditionally used for infusing with gin, vodka and brandy, but they also apparently make good jam and are ripe in August.  In France the 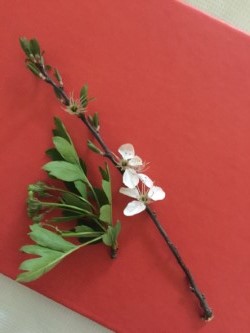 Blackthorn is known as La Mere du Bois, “the mother of the wood” – it is also referred to as the Dark Crone of the Woods as branches are dark, dense and thorny, the branches and twigs twisting and branching out in all directions. I was introduced to the Hawthorne as well, but wasn’t as taken with it as the Blackthorne.

I don’t know exactly what made me cry. I think the beautiful duality of what lay in my hand touched a sensitive nerve. The delicate white oval petals clustered into star shapes right next to wicked, dark, long sharp thorns. So beautiful.

Living with depression means that I spend most living hours in my own head, ruminating – measuring up logic and rationale for various dark ideas, pessimistically questioning my own existence and contribution to society. Building up thoughts only to smash them back down till I lose myself in black despondency, confused and self-destructive thoughts that often include suicidal despair.

How wonderful is it that nature need not justify its place or purpose in this world.

How beautiful is it that nature provides such lush fruit.

How delightful is it that long dark thorns can rest so close to beautiful clouds of creamy flowered petals.

If only depression let humans accept their place in nature and the world so gracefully.

Today, I sat on top of a hill and cried.

View all posts by Malan Wilkinson

This is a text widget, which allows you to add text or HTML to your sidebar. You can use them to display text, links, images, HTML, or a combination of these. Edit them in the Widget section of the Customizer.
Loading Comments...
%d bloggers like this: