This morning, things came to a head. For the last three or four mornings I’ve lied in bed wishing my life away. Believing somehow that if I lie there for long enough that it will all miraculously go away.

This morning saw me prepare to finally end things after desperately resorting to using the only thing I could possibly think of in my room, my bed sheet. I won’t go into too much detail about it here, just to say that a kind and vigilant member of staff caught me in good time. I had before that point, intended on taking a shower, but it all felt too much and I fell hard (that is, emotionally). I haven’t been able to properly wash for the best part of a week, so thinking about taking a shower felt overwhelming. Why did I believe that this morning would be any different? I sat in my room with staff and sobbed loud tears, probably wailed,  over what I had not been able to do. I cried in a way that only the most desperate of us suffering from mental health issues could possible imagine – a force of sorrowful cry that comes deep from within.

We talked things through, reflected and considered various ways of moving forward. We discussed talking more, trying to distract the mind, using other dialects,  perhaps adopting a morning routine et al. Another thing she suggested was we roll a piano onto  the ward from another ward, an idea that filled me with great joy apace with dread. I’m an avid Pianist and love nothing more than playing and improvising, but I can’t stand the thought of playing or even worse ‘performing’ in front of others. Playing piano is something I do when I’m alone. It is a thing that comes from within and a thing that cannot be touched by others. 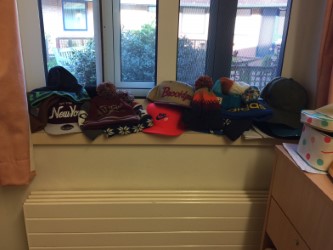 After this rather horrific start to the day, I got my mind moving and braved a shower. It wasn’t as bad as I’d originally imagined, although, it still felt exhausting. It took about twenty minutes flat to comb the knots out my hair before I even got drying it! Anyone that knows me will know I have a thing for hats/bobble beanies and have one for every occasion. I’ve worn one ever since being admitted (obviously to the dire detriment of my poor hair!) Pic gives you some idea how many I have in here.

The afternoon saw the weekly ward tea party/discussion take place and much to my amazement; the ward manager had arranged that the piano be delivered to the dining room in time for the occasion. A member of staff asked if I wished to play and I muttered something along the lines of not wanting others to feel like I was pushing myself or taking centre stage. I really don’t like playing piano in public, I’m rather shy about the whole thing to be honest. But,  I agreed to play a few tunes (some Chopin nocturnes and other light repertoire and improvisation) and felt incredibly humbled by the response I got. Some patients, I was told, were crying – not tears of sorrow, but of raw emotion. The experience touched me greatly. 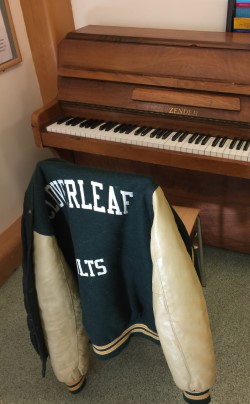 I sat there for a minute, looking at my hands, the exact hands that had meticulously worked in sync this morning in tying and knotting bed sheet. Resting on the white piano notes, my hands felt differently. They felt still and the music I was playing felt more like words  that I had been unable to express this morning. Ward patients that hadn’t spoken to me since I was admitted spoke to me after I played piano, warmly thanking me. And for what, I thought? For doing what I could? For sharing what little I could?

I could at this point shoot off in a completely different direction and blabber on about the importance of Art in health and wellbeing and/or the lost opportunities when it comes to introducing therapies in hospital – but instead, what I will say is that I agree with Bob Marley when he said that :

‘One good thing about music, when it hits you, you feel no pain.’

If music can relieve and soothe the tiniest part of this journey that we all call life – in my mind, is really is a worthwhile thing.

View all posts by Malan Wilkinson

This is a text widget, which allows you to add text or HTML to your sidebar. You can use them to display text, links, images, HTML, or a combination of these. Edit them in the Widget section of the Customizer.
%d bloggers like this: